In honor of Mother’s Day, I’d like to look at three faithful mothers in the Bible.  I hope you had the opportunity to celebrate (or reflect on) the love of your Mother or a special woman in your life. Mothers live out the grace, wisdom, and grit needed to care for their children. I threw grit in there because by definition it embodies what you need to be a mother- courage, strength, perseverance, and passion for long-term goals.  That holds true of mothers now and in Biblical times. Do you see these qualities in your own Mother or yourself? 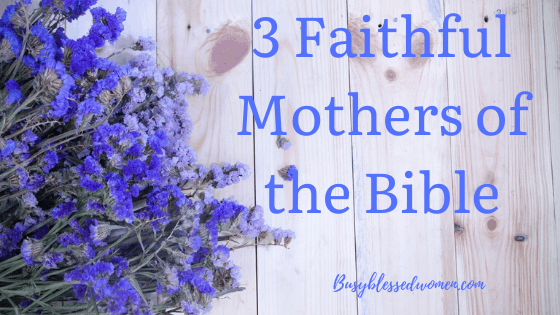 There is much more to Eve’s story than her epic error in judgment.

While the concept of evil was foreign to Eve, she still knew that she was supposed to obey God.  Since we fall into the trap of sin every day, we can’t throw stones at Eve.

Eve was not only the first woman on earth, but the first wife, companion, gardener, and mother.  She had directives from God, but otherwise, it was a “learn-as-you-go” life for Eve.

Eve’s first pregnancy happened after the fall.  Not only were they struggling with daily life (food, clothing, shelter), but now the first pregnancy.  I wonder if she had morning sickness, how Adam performed as a midwife, was she confused and/or frightened?  Eve had no mother, sisters, or girlfriends to ask for answers to her questions.

I love her response to her firstborn son, Cain- “With the help of the Lord I have brought forth a man.” Genesis 4:1(NIV).  Even after all she had gone through, she gives glory to her God.  Her gratitude reflects her faith in God’s continuing provision in her life. No complaining about her childbirth pains or exile from Eden. Just gratitude.

The heartbreaking moments of motherhood for Eve are told in Genesis 4 when her firstborn, Cain, murders his brother Abel.

Eve was the first mother to bury a child.

•Eve had a close relationship with God and her husband Adam, living an idyllic life in the Garden of Eden.  God gave life to Eve, and she gave life to the world. Adam named her Eve “because she would become the mother of all the living.” Genesis 3:20.

•Eve carried out her duties of a farm wife, companion, mother, cook, and housewife with no one to guide her.  She left paradise to lead a hard life.  She had to be ingenious and hardworking after the fall in making a life for her family.

•It must have broken her heart to know her firstborn was the murderer of her second son.  Cain’s punishment was to be a wandering, restless exile.  Did Eve ever see her firstborn again?

•Eve gave birth to Seth (Gen 4:25) and many other children. When Seth was born, she praised God for the gift of another child.

•There are only two other mentions of Eve in the Bible. Paul reminds the believers “I am afraid that just as Eve was deceived by the serpent’s cunning, your minds may somehow be led astray…” 2 Corinthians 11:3(NIV).  Eve’s unfortunate legacy is listening to the words of a smooth-talking serpent instead of God. Paul records her as the first woman of creation in 1 Timothy 2:13.

Reflection: Motherhood can leave us tired, overwhelmed, and lonely.  Some things don’t change; I’m sure Eve felt the same way.  God sees your hard work, your sacrifices, and your heart for your children.

How does Eve’s faithfulness to God, her resilience after heartbreak (leaving Eden, the death of a child), and hardworking dedication to her family encourage you?

Her name means “Jehovah is glory.”  It’s a rather remarkable name for someone we know very little about.  She is the first person of the Bible to have a name with an element of God’s name in it.

Jochebed was from the priestly tribe of Levi and marries a Levite, Amram, who also is her nephew (a common practice.)

Jochebed had three children:  Miriam, Aaron, and Moses.  She saved the life of her baby boy, Moses, with resourcefulness and faith.  Pharaoh was fearful of the exploding population of the Hebrews and commanded all newborn Hebrew boys thrown into the crocodile-infested Nile river.  Jochebed defies Pharaoh’s order and hides her newborn son for three months.  When she could hide him no longer, she made a waterproof basket for him and placed it in the reeds along the riverbank.  Miriam was along to guard baby Moses.

By God’s providence, Pharaoh’s daughter sees baby Moses when she comes down to the river, and she feels sorry for the crying baby.  Miriam approaches the princess and offers to find someone to nurse the baby- her own mother. God saves Moses’ life and allows Jochebed to nurse and care for her own child!

•Jochebed shows the fierce protectiveness of motherhood when she defies Pharaoh’s orders.  No doubt she had the help of the Hebrew midwives who let the baby boys live. They used the fake excuse that the Hebrew women were “vigorous”, giving birth before they could arrive.

•Jochebed shows her cleverness in devising a way to save her son. She fought for his life.  She shows her love, faith, and courage in placing Moses, her Hebrew son, in Pharaoh’s house.

•Jochebed shows what the determination and ingenuity of a desperate mother can accomplish.

•Jochebed trusted God to protect her son’s life.  What a glorious example to mothers everywhere to use your faith to entrust our children to God!

Reflection:  Don’t get between a fierce Momma and her child, right?!  It’s the same way Jesus loves us- fiercely; protectively.

I love Jochebed’s trust in God for the lives of her children. What does entrusting God with the lives of your children look like? 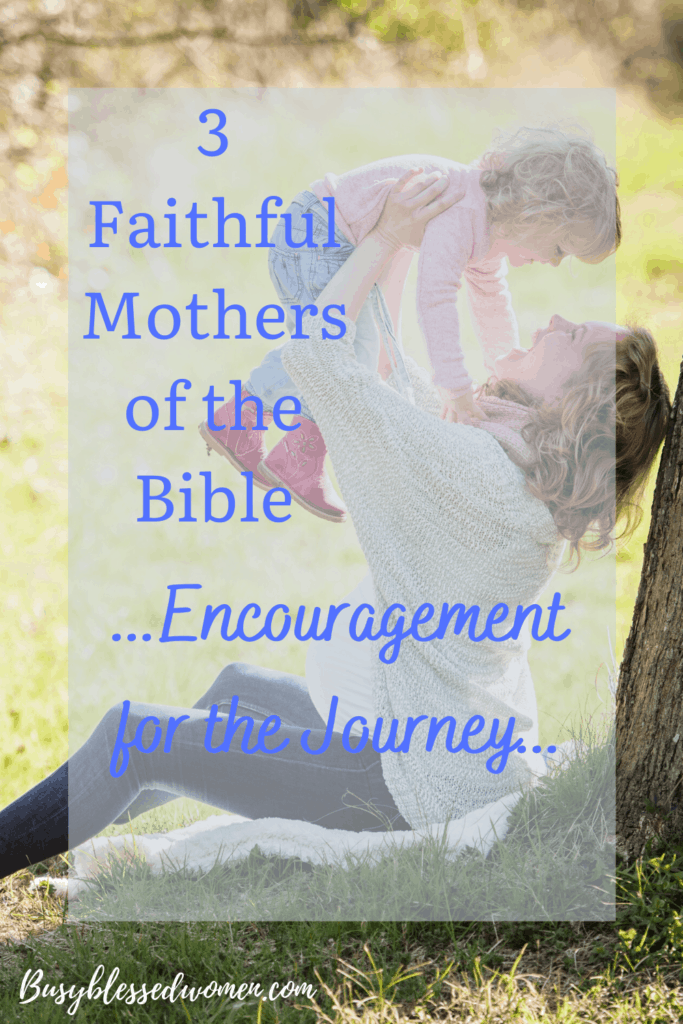 Mary, the Mother of God

Mary holds a unique place in Biblical history and right along with Eve, might be the most well-known of all Mothers of the Bible.  She holds the record of being the only Mother whose child chose her as his mother.  She gave birth to a son who was true God and true man. Most of what we know about Mary is from the New Testament, but she crops up in the OT in prophecy (Isaiah 7:14).

1. Mary was a willing servant with a deep faith in God and was obedient to His call. I’m sure she did not understand what she was in for or the suffering this trust would bring, but she responds with obedience and acceptance of His plan.

2. Mary’s life as the mother of Jesus was difficult. Just days before delivery, she rides from Nazareth to Bethlehem on a donkey. (That must have been uncomfortable.) She’s forced to give birth in an animal pen with only Joseph to attend to her.  Sometime after Jesus’ birth, they learn of the death threat on their child’s life and flee to Egypt. Her Son’s life and ministry were met with much skepticism. Jesus frequently butted heads with the rabbis of his day. Mary watched as her precious Son was put to death.

3. Mary was a Mom from a small town and a poor, humble family. She had to change the Messiah’s diapers, make his clothes, and feed and care for him and his siblings. I love that Jesus was born into an ordinary, simple family.

4. We read about two great “Mary as Mom” moments in the Bible.

Finding Jesus in the Temple

When Jesus was twelve, they went to Jerusalem for Passover.  Jesus, a precocious boy of 12, stayed behind when his family left and became absorbed with rabbinical teaching in the temple.  It was 3 days before they found Jesus, and Mary gave him a “talking to” for making them frantic with worry. (Sound familiar?)  Son of God, or not, your mother will worry about you!

The Wedding at Cana

When the wine ran out at the wedding in Cana, Mary asked her Son to help solve the problem.  Jesus gently responds, “Why do you involve me? My time has not yet come.”  Mary does not respond, but trusts in His ability to work out a solution. (Maybe she gave him “the look”?)  She tells the servants to “do whatever he tells you.” John 2:4-5 (NIV).

5. Somehow, I missed that Mary’s deep sorrow turned into the greatest joy, as Acts 1:14 tells us she was with Jesus after his resurrection, along with his disbelieving brothers. Her son was resurrected and the sibling rivalry was settled!

•One of the beautiful qualities of Mary was her willingness to completely trust God even though she was a young and frightened unwed mother.

•Even though Mary didn’t fully understand Jesus’ ministry, she supported him, (she was his first follower!) and supported him until the end of his earthly life.

•Mary is proof that God sees our hearts when he asks us to serve him.  Mary was an obscure, ordinary teen when He called her to become the earthly Mother of Jesus.

Reflection: Years ago, I was a suddenly single Mom with two very young children.  I’d love to say I showed the complete devotion to God that Mary did. But she does give us something to strive for.  He sees you, single Momma.  He knows you’re doing double duty, and it’s hard.  Press into Him and trust Him completely.  He has every confidence in you, as He did of Mary.

Faithful Mothers in the Bible

These are just 3 examples of faithful Mothers in the Bible.  But they do all have one thing in common: their faith and strong dependence on God.

Even though God expelled Eve from the Garden of Eden, her statements tell us she gives God all the credit for her life and family.

Jochebed was in the terrible position of giving up her son to imminent drowning or murder and entrusts God to intervene in Moses’ life.

Mary was in a delicate position as an unwed mother but trusts God to bless her with his Son.  His life must have made her wonder if she was capable or qualified to raise the Messiah.  His death must have devastated her.

All three Mothers of the Bible show fierce love and protection towards their children. Their lives and circumstances differ vastly from mothers today.  But the joy and excitement of their children’s birth, followed by years of hard work, discipline, grief, sadness, and delight in our children are universal. That hasn’t changed, even though our world has. I’m thankful for these snippets of the lives of Biblical Mothers to encourage all “every day Mothers.” 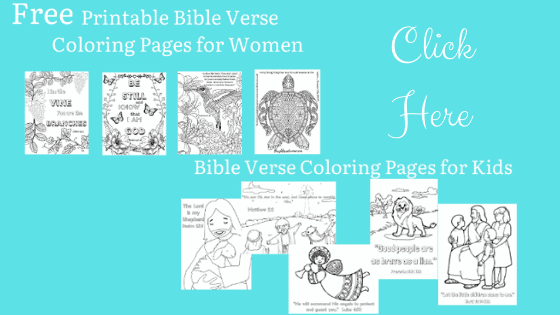 6 thoughts on “Mothers of the Bible”