Have you ever felt as if you were “wrestling with God”?  I certainly did when He led me to start this blog. I even had the audacity to put limits on what I would do for Him! They were based in fear and anxiety and not feeling capable. But He patiently and gently wrestled with me for months, showing me over and over that He is faithful. 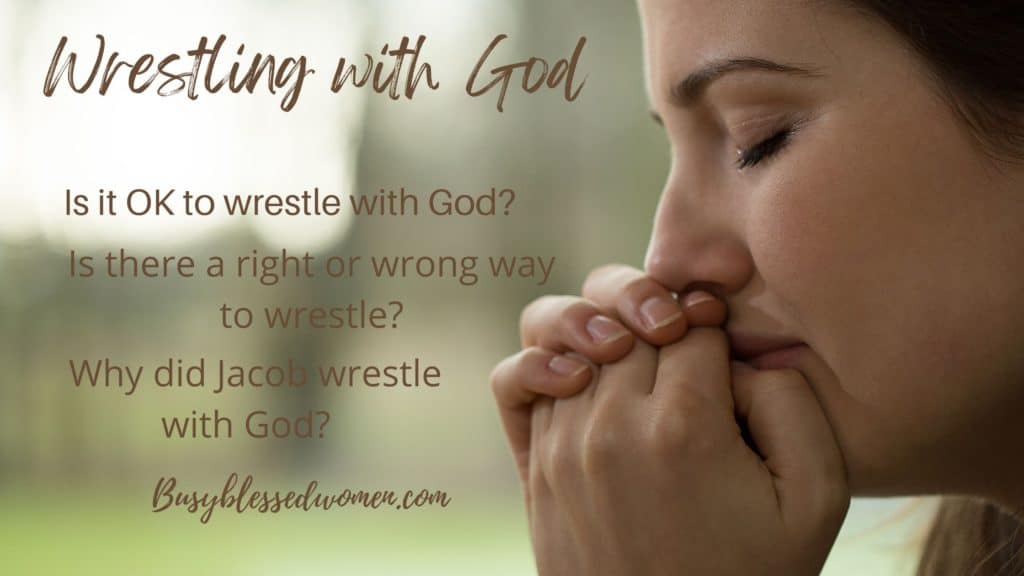 A bit of background:

The Life of Jacob

Jacob was the second-born twin to his brother, Esau. His parents named him Jacob which means “taking hold of the heel” and “he deceives” in Hebrew because Jacob had grabbed Esau’s heel at birth. He lived up to his name later when he grabbed Esau’s blessing and birthright with deceptive practices. You can read the crazy plan here (Lies! Deceit!): Gen 27:1-27

Esau didn’t take kindly to his loss and schemed to kill Jacob. Jacob was forced to flee from his family and became estranged from them.  His reliance on his own scheming, deceptive, self-reliant practices became a common theme in his life.

How Old Was Jacob When He Wrestled with God ?

After years of living apart, God finally instructs Jacob to return to his home in Canaan. He was nearly 100 years old.  But Jacob still fears Esau, so God lovingly gives him instructions and promises to go with him.  Jacob was so fearful of his reunion with Esau, he took matters into his own hands (again!).  He divided his family and wealth into 2 camps for protection.  He was preparing for the worst.

Jacob sent everyone ahead of him and stayed behind for the night.  He felt the need to be alone before he met up with his brother. While in this time of intense fear and uncertainty, Jacob pours his heart out to God. Hosea 12:4 says he “wept and prayed for his favor”.  As he was doing so, God comes to Jacob in some physical form so he could wrestle with him.  God initiates a wrestling match!

Bible Verses about Wrestling with God

Isn’t it interesting that God initiated this wrestling match and that God wrestled Jacob all night long? I’m picturing a lot of “back and forth” wrestling moves in this tent!

“So Jacob was left alone, and a Man wrestled with him till daybreak. When the Man saw that he could not overpower him, he touched the socket of Jacob’s hip so that his hip was wrenched as he wrestled with the Man. Then the Man said, “Let me go, for it is daybreak.”

But Jacob replied, “I will not let you go unless you bless me.”

The Man asked him, “What is your name?”

Then the Man said, “Your name will no longer be Jacob, but Israel, because you have struggled with God and with humans and have overcome.”

Wouldn’t you love to hear God say to you “you have struggled with God and with humans and have overcome.”?! I want to be an overcomer!

What Does it Mean to Wrestle with God?

Have you ever thought that questioning God was wrong? The truth is that it actually takes faith to come to God for wisdom and guidance when you do not understand something. It is better to come to Him with a humble heart asking for discernment and guidance instead of losing heart or turning away from Him in anger, disappointment, or discouragement.

I love this picture of Jacob and God wrestling.  It’s as if God is saying that He knows our fears and anguish and will come to us and help us work through them.  It may take a while, but He’s ok with it, as long as we come to Him (not turn to worldly influences) to wrestle through our personal struggles.

Meaning of Jacob Wrestling with God

I also love this reminder that God doesn’t force us to give in to his will.  Verse 25 says “When the Man saw that he could not overpower him” …

Of course, God could have pinned Jacob instantly. But that wasn’t God’s reason for wrestling with him in the first place!

God didn’t pin Jacob down and make him cry “uncle”.  He didn’t force his will on Jacob.  The wrestling had to do with Jacob’s struggle of obeying God’s command to move back home. God let Jacob wrestle all night long. God patiently wrestled WITH Jacob until he was ready to fully surrender to God.

No more deception. No more scheming. From now on it had to be God’s way, not “Jacob’s way.”

God lets us make move after move as we work through our uncertainties, dilemmas, and trials.

To remind Jacob that His will is sovereign, God finally dislocates his hip to end the match. Ouch!

God was preparing Jacob to return to Canaan, the promised land, and Jacob needed to understand that God was in control. At that point, Jacob realizes he is wrestling with God and that he needs God’s blessing in his life to go forward and reunite with his brother.  Jacob finally fully surrenders and trusts in God.

Jacob’s limp lasted his entire life. What a reminder that he needed to surrender and trust in God every day! 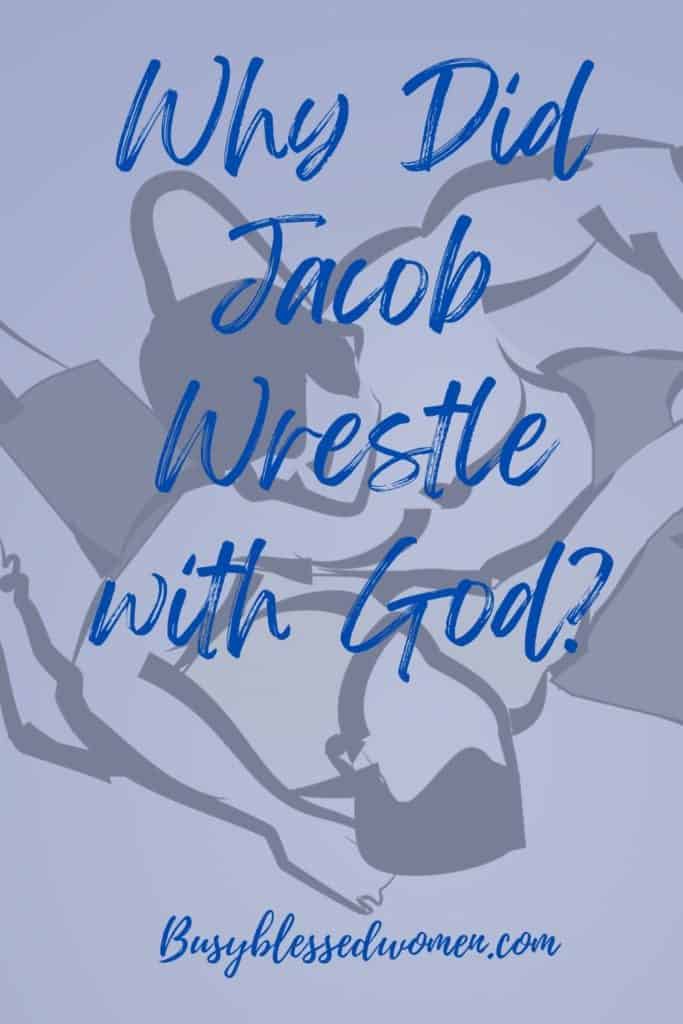 Wrestling with God in Prayer

My first thoughts on this story are that while Jacob was praying to God with fear and uncertainty (even though God himself had already promised Jacob protection!), God came to him to help him wrestle through his problem.

Are we any different than Jacob?  We know God’s promises to us, and yet we succumb to fear and worry so easily.

When we go to God in prayer with our fears, emotions, doubts or anxiety, God is faithful to come to us.

It was also interesting to me that He didn’t come just to comfort him, give him reassurance or speak tender words. He wrestled with Jacob! “Wrestle” in Hebrew meant “grapple, get dusty.”

Can you believe it?? God is willing to get down in the dirt with us, wrap Himself tightly around us, and wrestle through any difficult situation or problem! We don’t have to work through trials alone, or even worse, walk away from God.

Wrestling in Prayer for a Breakthrough

God is our good Father.  Just as we want to help our children work through problems instead of “fixing” them for them, God wants us to work through our problems with his help.

This verse from Paul came to mind: “… Continue to work out your salvation with fear and trembling.” (Phil 2:12b)

Working out our salvation in this verse doesn’t refer to attempting to earn our salvation through good works.  Paul wanted the Philippians to know they needed to express the gift of salvation by working through their spiritual growth and development.

We need to wrestle! Even the brainiest theologians study God’s Word for years. Our salvation brings with it an ongoing learning process (sanctification). We are a people set apart, filled with the Holy Spirit, and trying to become as Christ-like as possible. There will be times we stumble and trust in our own strength, decisions and will instead of God.

What a blessing that He is willing to guide us and direct our ways!

And that “fear and trembling” part- we are to wrestle through our problems, not with doubt and anxiety, but with reverence to our awesome God .

•Wrestling with God through a storm or trial brings the blessings of understanding and clarity. We may not enjoy the wrestling match (why God???), and it may include pain, tears, and leaving with a limp, but God never wants us to be confused or anxious about His plans.

•Have you ever wrestled with God in the midst of a trial and experienced pain? Did your trial leave you with a limp? May we always work through our problems with God until we find our answers; then fall into His arms for a blessing. May it be a reminder to surrender and trust.

•God wants to bless us and transform us.  He meets us in our fears, sadness, uncertainty, and pain.  Wrestling through these things increases our faith and love for Him.  We walk away transformed in ways that never could have happened without the wrestling.

Why Did God Wrestle with Jacob?

Jacob had a history of relying on his own resources, deception, scheming, and shrewd business moves instead of God.

Jacob came away with a sore hip, but not without good reason.  He already feared meeting his brother, and to be physically weaker put him at a disadvantage. Also, Jacob needed the blessing of learning to rely fully on God.  That blessed him further with a stronger, more secure faith.

Wrestling with God brings our personal relationship with Him to a higher level.  We become closer to Him and see how much he cares and loves us.  We can recognize the work He is doing in our lives, and we don’t fear it, or run from it.  That gives us peace in our lives that we might never experience.

Jacob blesses his grandchildren at the end of his life with these descriptions of his relationship with his God: “May the God before whom my father’s Abraham and Isaac walked, the God who has been my shepherd all my life to this day, the Angel who has delivered me from all harm- may he bless these boys…” Gen 48:15-16.
He reminds his family (and generations to come) that his faith in God became absolute.  God had cared for him as a shepherd does with his sheep his entire life.  He learned to trust him completely.

Encouragement for the Week:

Are you wrestling with God- having your own personal struggle- just as Jacob did?
Are you frustrated with God or carrying a heavy burden?
Don’t fear wrestling with Him.  He wants to mold you into having the best possible personal relationship with Him.  Ask Him to make His path clearly known and rest in His plan.

Let Him show you his heart.♥

If you want to see Him work in your life, give Him the chance to show you what He can do!

All Scripture is from the NIV version unless specified otherwise.

20 thoughts on “Wrestling with God”