Did you see the super moon last week? A thick cloud cover kept us from seeing it in its full glory. The night before however, we saw it rising in the night sky and were utterly amazed at its brightness and how huge it looked! Since I’ve been reading the Christmas story in the gospels, it reminded me of the shepherds and their heavenly vision of angels. 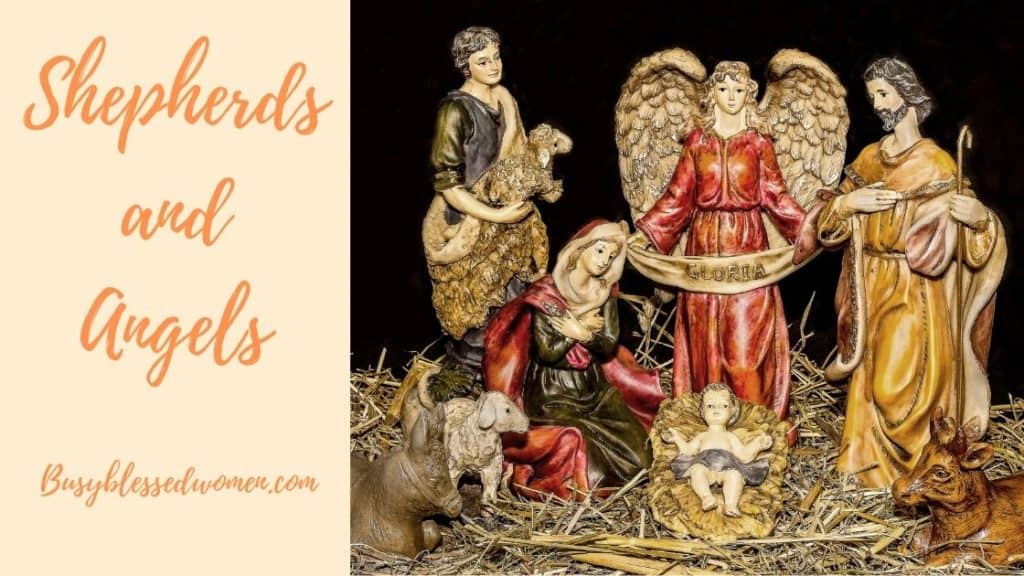 This angelic visit occurred in the fields, at night. The second chapter of Luke tells us the story. “An angel of the Lord appeared to them, and the glory of the Lord shone around them”– v9. What does “glory of the Lord” mean? Well, it “shone” around them, and we attribute that word to light. I can only imagine how bright that light must have been. Similarly, Rev 21:23 describes the new heaven and earth as a city that “does not need the sun or the moon to shine on it, for the glory of God gives it light.” No wonder the shepherds were afraid.

Verse 13 goes on to say “Suddenly a great company of the heavenly host appeared with the angel.” Can you imagine? How many were there? Thousands? Hebrews 12:22 tells of “thousands upon thousands of angels in joyful assembly” to describe angels in heaven. Granted, this was a VIP message they were bringing- but it sounds like they were joyfully celebrating this first Christmas! They appeared and praised God saying “Glory to God in the highest, and on earth peace to those with whom God is pleased.”

What does your praise to God for the gift of Jesus sound like?

Had the angels been waiting for Jesus’ birth too? Did they see all the sin in the world and now they could celebrate the birth of the one who would atone for that sin? Heaven could now be filled with those who choose to believe in Jesus. Maybe they had been waiting and longing for our company in heaven too.

The Announcement of Jesus’ Birth

I love the fact that God sent the angels to poor shepherds. Why not just light up Jerusalem with their message? It was only 5 miles away from Bethlehem, and its population was much larger. No, God sent the angels to announce Jesus’ birth to a few shepherds out in a dark field. Just ordinary, hardworking people. We can look at this story and know that God sent Jesus to everyone- the ordinary to the exceptional.

I’ve learned that shepherds in biblical times were very protective of their sheep. They spent their time looking out for robbers and wolves that might attack their flock. So it says something about the vision they just experienced to know that after the angels left, they looked at each other and said: “Let’s go to Bethlehem and see this thing that has happened, which the Lord has told us about.” –v15. They left their flocks- which they never did- and took off to see the King.

Those simple shepherds were the first evangelists in Bethlehem! They came, they saw, and they “spread the word concerning what had been told them about this child.”-v17. How could they keep it to themselves?

What keeps you from worshiping the King?

Do we need a supernatural heavenly vision to convince us to tell the story?

The angel proclaimed to the shepherds, “I bring you good news of great joy that will be for all the people. Today in the town of David a Savior has been born to you; he is Christ the Lord.”-v10-11. They didn’t proclaim him to be just a prophet.  Or a great man. The angel says “a Savior has been born.” The angel who appeared to Joseph told him to give the child “the name Jesus because he will save his people from their sins.” Mt 1:21.
The angel calls Him “Christ the Lord”- Christ (meaning “anointed one” – it is the Greek equivalent of the Hebrew word for Messiah).¹ The Jews of the day were fully aware of the prophecy concerning the Messiah. While their vision didn’t match up to God’s, the good news remains the same.

He came to save us all from our sin. He is the Gift. We only need to accept it.

Our Messiah has come!

“All this took place to fulfill what the Lord had said through the prophet: “The virgin will be with child and will give birth to a son, and they will call him Emmanuel”- which means “God with us.” Mt 1:22-23