The raising of Lazarus is one of three stories of individuals that Jesus resurrected from the dead (besides Himself).  We know the disciples saw Jesus perform many unrecorded miracles, so there may have been many more.  As we move towards Easter and Jesus’ own resurrection, I want to study the raising of Lazarus.  There are great lessons in this story! 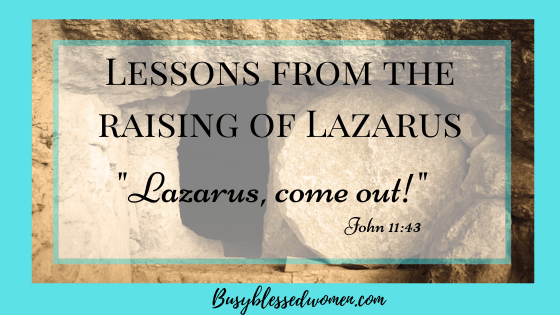 Lazarus was the brother of Mary and Martha and they were among Jesus’ closest friends.  Lazarus’ name in Hebrew means “God has helped.” I find no coincidences in the Bible, so the fact that his parents named him before knowing the outcome of God’s help in his life is amazing to me!

Lazarus came down with an unnamed, grave sickness, and when his sisters Mary and Martha realized his condition was worsening, sent word to Jesus for help.

Jesus was preaching out of town, and when he got word of Lazarus’s illness replied, “This sickness will not end in death.  No, it is for God’s glory so that God’s Son may be glorified through it.” (V4) Then he stayed where he was for two more days.

We read in verse 5 that Jesus loved this family and often stayed with them.  We might expect (as Lazarus’ family did), that He would come running to help. But God’s timing is not our timing.  His delay in coming to Lazarus is a great example.

When Jesus finally announces that he wants to go to Lazarus, he tells his disciples plainly “Lazarus is dead, and for your sake, I am glad I was not there, so that you may believe.  But let us go to him.” (v14)

Just as Mary and Martha called for Jesus to help, we too should not hesitate to call on Him.  They were aware of the miracles he had performed previously.  We too, know of them from the Bible. He can heal!

This is a great reminder that nothing is impossible for God and I shouldn’t hesitate to ask Him for anything!

Have you ever had an issue with God’s timing?  I have.  I get anxious, afraid, and start questioning.  When I think he is slow to answer (my timing), I need to remember that he alone is sovereign, knows what I need, and when I need it.

Jesus is never late. His timing is always perfect.

I need to remember this truth and cultivate patience and trust. This will help me withstand the storms of life.

Lazarus died so that Jesus’ power over death would be apparent to his disciples. He was showing them something better than healing.  He was proving he has the power to raise us from death.

Jesus explained quite clearly that his purpose was to reveal God’s glory.

Do I trust him in hard times and see them as opportunities to reveal His glory? (Sometimes…)

I’m working on an attitude of hope and confidence in His control and timing.  I love this quote:

As Jesus approached Bethany, he discovered that Lazarus had been dead for 4 days.

When Martha heard that Jesus was near, she went out to meet him.  She met him saying, “Lord, if you had been here, my brother would not have died.  But I know that even now God will give you whatever you ask.” (v21).

Her full confidence in Jesus’ power was on display.  When Jesus replied, “Your brother will rise again”, she assumed he meant the resurrection on the last day.

Martha returns to Mary to tell her that Jesus was asking for her.  Mary, despondent in her grief, fell at his feet and said exactly what her sister had said, “Lord, if you had been here, my brother would not have died.” (v32)

When Jesus saw Mary and all who were with her weeping, he was “deeply moved” and wept. (v33,35)

Some commentators believe that he was not only weeping out of compassion for his friends but the state of death that was the punishment of sin for the world.

I want to be like Martha and run to Jesus for my comfort.  He is the only one who can give true, lasting comfort.

Jesus didn’t say “I will give you resurrection”, he said, “I am the resurrection.”  Big difference.  Martha’s response? “Yes, Lord.”  That’s the response Jesus hopes to hear from everyone when he asks us if we believe in Him.

What a beautiful picture of the compassion of Jesus as he wept with the mourners.  He saw his friends suffering in their grief and had compassion for his friends. He saw the punishment of death and grieved over it.

Jesus has the same compassion for us today. We can go to him with our sorrow and frustrations. 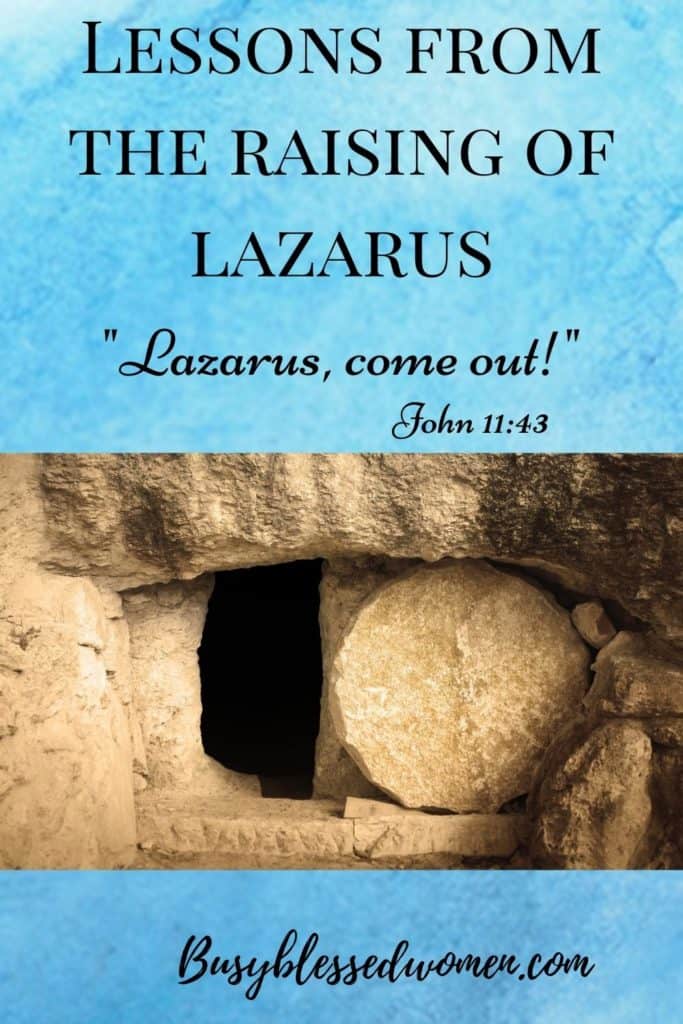 Jesus Raises Lazarus From the Dead

As Jesus approached the tomb, he asked that the stone be moved away.  Martha warns him that Lazarus has been dead for 4 days, and there would be a “bad odor” (v39)

Jesus gently reminds her, “Did I not tell you that if you believed, you would see the glory of God?” (v40)

As they rolled the stone away, Jesus looked up to heaven and thanked his Father for always hearing him.

He was thankful that each person standing there would see this miracle and have the opportunity to believe that his Father had sent him.  He would restore the life of his friend and show his authority and power to grant eternal life through resurrection.

I’m trying to imagine the scene as they roll away the stone.  The tomb is dark, was the crowd hushed? What did they expect would happen?

Suddenly Jesus called out in a loud voice, “Lazarus, come out!” (v43) Lazarus miraculously appears with his grave clothes still on.  Jesus tells them to remove the strips of cloth and “let him go.”

When Jesus thanked his Father, it was for already answering his prayer.  He didn’t ask God to raise Lazarus, he knew this miracle would happen.

How does that speak to how we respond in faith to Jesus through prayer?

Raising Lazarus from the dead was a remarkable demonstration of Jesus’ power.  He showed the power of eternal life triumphing over death to the crowd and to us.

Can you imagine how Lazarus felt?  The last thing he remembers is being sick!  The next thing he knows, he is walking out of a grave.  Can you picture the joy and thanksgiving that occurred that day?

How did Lazarus live out the rest of his life?  What were his reactions?  Was he a changed man?  He had to be!

Jesus has done the exact same thing for you and me spiritually. He has called each one of us out of the grave.

What can I do and say, and how can I show my excitement for the work my Savior has done for me?

Jesus used his words in the raising of Lazarus. Lazarus heard his dear friend call him by name and responded.  He calls each one of us by name as well.  When we believe and come to Him, our eternal life begins! We are never far from his infinite love and the abundant life he promises.

24 thoughts on “Lessons from the Raising of Lazarus”