We celebrate Thanksgiving this week, which naturally brings thoughts of thankfulness and gratefulness. There are many Bible verses that tell us how and why to give thanks to God, including ones where Jesus gives thanks. That led me to a question: Why did Jesus give thanks?

Importance of Giving Thanks

God is so gracious and good to us! He provides everything we need. Expressing our thanks to Him for all our blessings keeps us humble and focused on Him.

We sometimes, however, lean towards self-centered thinking, believing our achievements come from our own willpower, intelligence, and strength.

Like any good parent, God wants us to learn thankfulness. A thankful spirit knows everything we have is a gift from God and thanks Him for them.

Giving thanks also keeps us from focusing on what we do not have or want. It reminds us of all we do have and keeps our lives in line with God’s perspective.

Thankfulness in the Bible

Thankfulness is a major theme in the Bible. So much so, that Paul attributes a of lack of thanks to God as contributing to some painful consequences-

“For although they knew God, they neither glorified Him nor gave thanks to Him, but their thinking became futile and their foolish hearts were darkened.” Romans 1:21

Why We Should Thank God Bible Verse

Instead, thankfulness should be a hallmark characteristic of Christians-

“Give thanks in all circumstances, for this is God’s will for you in Christ Jesus.” 1 Thessalonians 5:18.

(Notice we give thanks in everything, not for everything…)

Paul is saying that giving thanks in everything is God’s will for us, in the good times and even when our world comes crashing down.

These times test our faith, and when we can praise God THROUGH them, we will experience His peace in ways we never have before.

Reasons to Be Thankful to God

The Bible has also given us many reasons for giving thanks to the Lord:

First and foremost, for His greatest gift- our salvation through Jesus (John 3:16).

“The steadfast love of the Lord never ceases; His mercies never come to an end.” Lamentations 3:22-23 ESV. Each day is a fresh start for us!

“Let us come before Him with thanksgiving and extol Him with music and song. For the Lord is the great God, the great King above all gods.” Psalm 95:2-3. There is no other God like our God!

Jesus never sinned and therefore, didn’t need salvation or have to worry about losing His focus on the Father. So why was Jesus thankful?

Was He being a role model for us? Why would the Creator give thanks for that which He created in the first place? Let’s investigate the instances of when Jesus gave thanks to find our answer.

Jesus Gave Thanks before Miracles

When Jesus fed the 5,000, the crowd was mostly Jews. It was customary for the Jews to recite this prayer right before eating-

“Blessed are You, Lord our God, Ruler of the universe, who brings forth bread from the earth.” 1

Generations of Jews passed this prayer on to give thanks to God for creating and providing the food. Perhaps this is the thankful prayer He recited.

The feeding of the 4,000, however, was a mostly Gentile crowd. Jesus not only gave thanks to His Father for the provision but was showing the Gentiles why and how to give thanks.

Jesus wasn’t asking God to raise Lazarus. He was acknowledging His dependence on the Father who worked through Him and in thanksgiving for always listening to His prayers.

Jesus Gives Thanks for His Disciples

Jesus had previously sent 72 messengers out to prepare the surrounding towns for His upcoming visits. They had returned with joyous news of success.

In response to this good news, He thanks the Father for revealing His wisdom to His disciples. These 72 simple believers willingly went out to spread the message of the Kingdom of God.

He gives thanks to God that spiritual truth is available to all “babes” who will come with a humble and sincere heart, regardless of intelligence or abilities.

Jesus Gave Thanks and Broke the Bread

Jesus, however, didn’t give the normal explanations but gave the traditional thanks to God for His provision, then adds the focus on His suffering to come.

Luke 24:30-31 “When he was at the table with them, he took bread, gave thanks, broke it, and began to give it to them. Then their eyes were opened, and they recognized him, and he disappeared from their sight.”

It was when Jesus gave thanks for the meal that they recognized him. We don’t know why their eyes were opened at this time. Maybe it was His demeanor, His words of thanks, or perhaps they noticed His pierced hands.

We don’t “see” Him today, but know His presence in our daily lives. Perhaps we should pray for our eyes to be opened to always see Him with us… 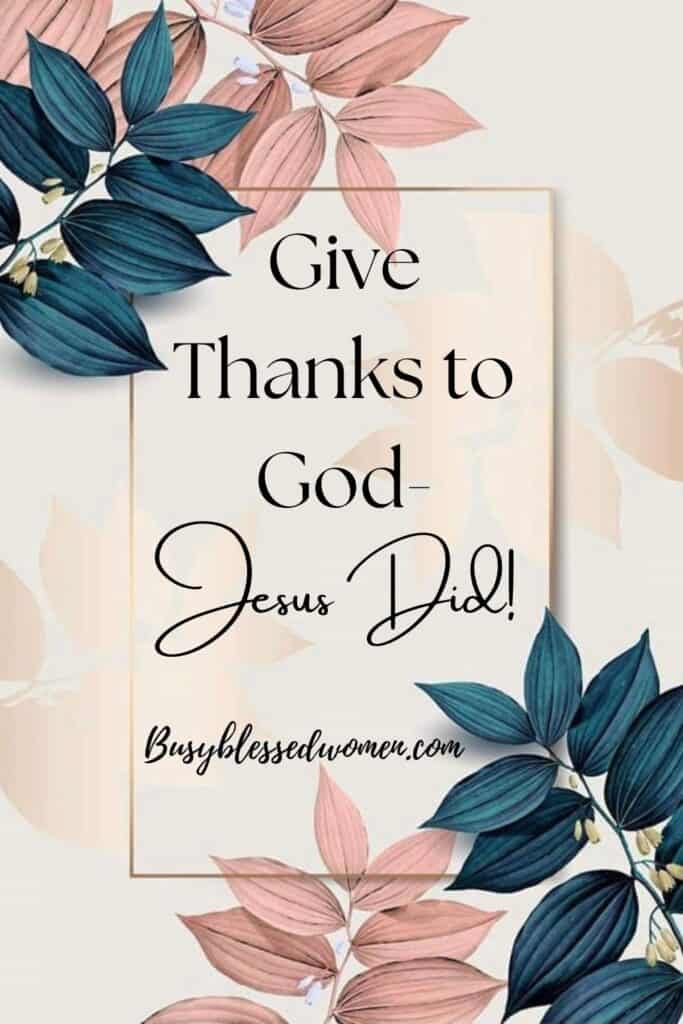 How Many Times did Jesus Give Thanks?

I found these six times where Jesus gave thanks. Some were repeated in other Gospels, so that can inflate the numbers.

I’m positive Jesus gave thanks on numerous other occasions. Jesus did many wonderful things and “even the whole world would not have room for the books that would be written.” John 21:25.

What’s more important are the situations Jesus gave us to reflect on. Let’s break down each one.

Jesus was a fully human Jewish man steeped in His religion since birth, who also was still fully God. He laid aside His glory to live among us, not only as the perfect sacrifice, but to reveal God to us.

Jesus tells Philip, “Anyone who has seen me has seen the Father.” John 14:9. He reveals the heart of the Father in all His words and deeds, including giving thanks.

He is the perfect example for us to follow and shows us how to live our lives.

When Jesus gave thanks before feeding the enormous crowds, His prayer shows us to give thanks not just for the food, but to God, who created and provides it for us.

Being Thankful to God

•When Jesus gave thanks to the crowd of Gentiles, He was modeling not only thanksgiving but showing them who had truly provided the meal- God the Father.

It reminds me of the times we pray before meals in front of unbelievers, whether it be at home or at a restaurant. We aren’t out to make a show out of our faith, or to have others see us, or concerned about what they might think.

We are showing others simple basic truths- God provided the food and we are thankful.

•Jesus gave thanks right before He raised Lazarus from the dead. He raised His voice so that everyone there would hear and know what kind of relationship He had with His Father.

These simple words of thanksgiving- “thank you that you have heard me”- were also for answering His prayer.

How often do we remember to thank Him for His answers to our fervent prayers?

•Jesus gave thanks for the joyous news of His disciple’s successful mission trip. God graciously revealed His wisdom to these men- not learned Jewish rabbis or rabbinical students, but everyday working people.

Do we give thanks for the power of His Word, provided so generously, for His wisdom and guidance? For being part of His plan to spread the Good News to the world?

Being Thankful During Difficult Times

•Even on the night before His suffering, Jesus remained thankful. During the Last Supper, He gives God thanks for His provision, knowing that the Jews would soon have Him crucified. His disciples would betray Him and scatter in fear.

The bread represented His body, the cup, His blood. Jesus gave thanks, knowing that God’s plan was reaching fulfillment.

It was the reason He came to earth, and “who for the joy that was set before Him endured the cross.” Hebrews 12:2.

He wasn’t joyous for the ordeal and pain He would endure, but the good that would come because of His sacrifice.

Jesus gives us a powerful lesson on thankfulness during trials. Not only did He teach it, but He showed us how it is done.

Jesus knew the difficulty of being thankful during hard times. Does His example make it easier for you to give thanks in all circumstances, even the difficult ones?

Thanks Be to God!

A Prayer of Thanks

Thank you, Jesus, for showing us how to give thanks. You gave thanks when you fed the multitudes of hungry people, raised the dead to life, spoke truths to the disciples, and gave your body and blood for the sins of the world.

Your thankfulness shows us the closeness of your relationship to Your Father, working in tandem with Him to always meet our needs and come close to us.

Thank you for opening our eyes to see you and know you personally. Thank you for the many blessings you shower down on us daily. What comfort you bring, knowing You hear every prayer we speak, and that You are present in all situations, especially those difficult times when we need you the most.

Help me follow your example, Lord, in giving thanks. Not just this month when thankfulness in on our minds, but in all things. Amen.

A Psalm for Giving Thanks

The Psalms are full of praise, worship, and thanksgiving, but there is one Psalm known as the Psalm of Thanksgiving- Psalm 100. Even though it is short, it is a joyous celebration of our wondrous God and perfect for our Thanksgiving reflections.

“Shout to the Lord, all the earth. Worship the Lord with gladness; come before him with joyful songs.

Know that the Lord is God. It is he who made us, and we are His; we are His people, the sheep of His pasture.

Enter His gates with thanksgiving and his courts with praise; give thanks to him and praise His name.

For the Lord is good and his love endures forever; his faithfulness continues through all generations.” Psalm 100:1-5.

All Scripture is from the NIV unless specified otherwise.