When I started doing a bit of research last week into the disciples, I came across articles on the women disciples of Jesus. I knew some stories of women in Jesus’ life, but I didn’t think of them as disciples. I also knew that women in Jesus’ time had a pretty low status strictly because of their gender. This would seem to have put them at a distinct disadvantage at becoming a disciple.

You’ve probably heard of Mary Magdalene, Martha, and possibly Mary the mother of James. But how about Joanna, Salome, and Susanna? They were all disciples of Jesus! 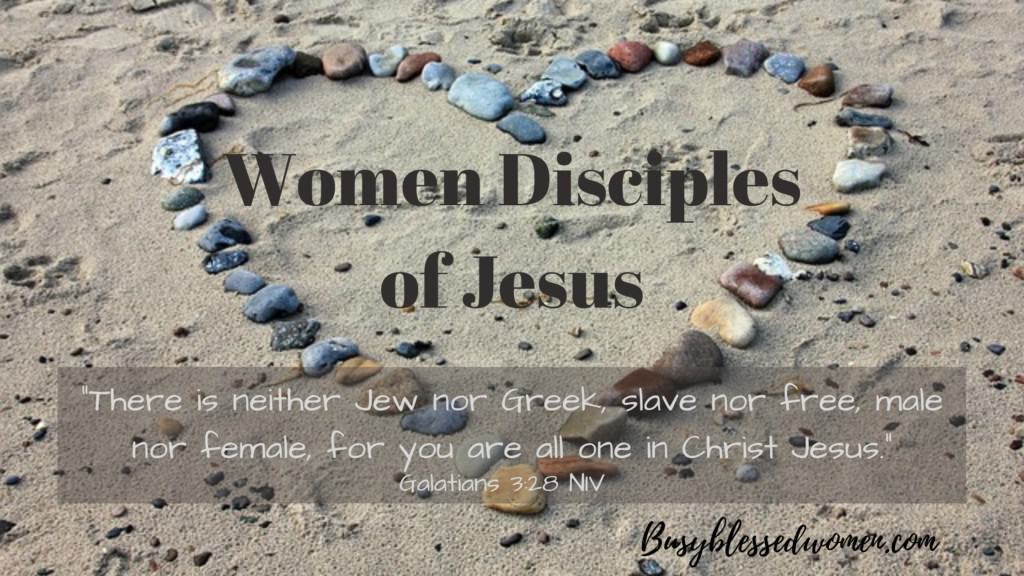 Let’s think about the daily life of a woman in Jesus’ day. Hebrew culture in the Bible dictated their lives.

They lived in villages, usually in small homes. Theirs was a domestic life of baking, cooking, washing, and childbearing. They were in charge of the kitchen, and because they were Jewish, were in charge of obeying the laws in regards to keeping a kosher kitchen.

Women were expected to be good wives and mothers and stay at home. They were not allowed to go to school as young girls, that was for boys only.

Women were not to be spoken to in the street and must walk six paces behind her husband. Her hair must be covered. No Jewish or Roman court allowed the testimony of women. They were almost like property- handed from their fathers to their husbands.

Women were also considered “unclean” during menstruation and childbirth for varying lengths of time. This kept them out of the synagogue for most days. When they could go, they had a secluded section just for the women, separate from the men.

I also found this: “every Jewish man is obligated to recite three blessings daily. These express gratitude for one’s station in life through the negative statements: “Thank God that I am not a gentile, a woman, or a slave.”¹

I’m sure you get the picture by now. It makes me realize even more just how radical Jesus was in his positive regard towards women.

So what possible role could women have in Jesus’ ministry considering these limitations? Luke 8: 1-3 describes it-

“Jesus traveled about from one town and village to another, proclaiming the good news of the kingdom of God. The Twelve were with him, and also some women who had been cured of evil spirits and diseases: Mary (called Magdalene) from whom seven demons had come out; Joanna the wife of Cuza, the manager of Herod’s household; Susanna; and many others. These women provided for them out of their resources.”

The Greek word used for “provided” here meant to serve, wait on, minister to and it was used in the early Christian community to describe “Eucharistic table service and proclamation of the word.”²

All these women supported and served Jesus in his ministry. They had been healed by him and were anxious to learn; to be his students.

Had there ever been a man who would allow them to be seen, spoken to, and taught in public? I wonder if the disciples were a bit shocked by his behavior??

Woman at the Well

Jesus’ attitude towards women was extremely radical for his day. He spoke to a Samaritan woman at the well (John 4:1-26) which broke 3 rules: she was a Samaritan (hated mixed-race Jew), was known to be living in sin, and was in a public place. There was all kind of “uncleanliness” going on there.

Jesus and the Adulterous Woman

Jesus also showed compassion, mercy, and forgiveness to the adulteress brought before him by the Jewish leaders. (John 8: 2-11.)

Jesus Heals the Women with the Issue of Blood

He heals a woman who has been bleeding for twelve years (more uncleanliness- Luke 8: 43-48.) He speaks to her so tenderly, calling her “daughter” as he heals her. His kindness and respect for women were unheard of.

No wonder women left their village life. While traveling and living conditions might have been a bit rough, it didn’t stop these women from faithfully following and serving Jesus. They all just wanted to be with Him.

Women At The Crucifixion

It’s interesting too, I think, that at Jesus’ crucifixion, there were more women than men in attendance. Most of the men scattered.

Matthew 27: 55-56 tells us that “many women” were there, watching from a distance. They name only a few- Mary Magdalene, Mary the mother of James and Joseph, Salome the mother of the sons of Zebedee, Jesus’ mother Mary and her sister, and Mary the wife of Clopas.

John’s gospel is the only record of “the disciple whom Jesus loved”-John- being in attendance. The others had fled when Jesus was arrested.

Women at the Tomb

When Joseph of Arimathea laid Jesus’ body in his tomb, Mary Magdalene and the other Mary were there watching. They also were the first to return to the tomb as soon as they could and the first to be witnesses to Jesus’ resurrection.

What an honor that was! He even made them his first “apostles” (in Greek- “a messenger; one sent out”³) – sending them to spread the good news- “Go and tell my brothers to go to Galilee; there they will see me.”– Mt 28:10.

What a huge change for women of that day! They had been taught by Jesus, witnessed his miracles, stayed with him through his death and resurrection, and were now being commissioned to spread his Good News.

In Acts 1:14, the women were with the men as they “joined together constantly in prayer.” The barrier that had previously existed between men and women worshipping God was gone.

In Acts 12:12, many people had gathered in Mary’s home for prayer and meeting. You can read the story of Lydia, Paul’s first convert in Acts 16: 14-15. Her home became the first church in Philippi.

Women had important roles in the early church, and give us a clear picture how much Jesus treasured them, and us, in our roles as his disciples.

We are All Equal In The Eyes of God

Jesus saw women (and all people) as created equal.  It’s exciting to think that he knows our strengths and power and values our work- but then again, He created us.

We’re all equal in the eyes of God.  He gave us so many examples of how to overlook our differences and be unified as believers. Shouldn’t our attitude be like that of Jesus?

Galatians 3:28 – “There is no longer Jew or Gentile, slave or free, male and female. For you are all one in Christ Jesus.”

4 thoughts on “Women Disciples of Jesus”