Do you know the story of Rahab in the Bible? She is sometimes called “Rahab the Harlot” (a prostitute), is an Old Testament heroine, and shows up in the genealogy of Jesus! How did Rahab make this amazing life change?

Let’s start with some context to see how Rahab becomes one of the great women of the Bible.

Joshua had taken over the leadership of the Israelites. The time had finally come for them to enter the Promised Land. Joshua secretly sends two spies to look over the land, especially Jericho.

The City of Jericho in the Bible

Jericho was constructed with strong double walls for protection and was located on a strategic trade route. Archeologists consider it to be the oldest city in the world; excavations date it back to at least 9000 BC!¹

It was also a pagan city; the center of Canaanite worship of the moon-god. (One of the Hebrew meanings of Jericho is “moon city.”) They were an extremely wicked and idolatrous people, descending from Noah’s grandson, Canaan.

We find Rahab’s story in the Old Testament in Joshua 2:1-21.

The two spies followed Joshua’s instructions and snuck into the city of Jericho.

“So they went and entered the house of a prostitute named Rahab and stayed there.” Joshua 2:1.

There is no way to sugarcoat it. The Israelite spies entered Jericho and entered the house of a prostitute.

Were they being followed and knocked on the first door they came to? Did they unknowingly knock on the door, and she let them in? Was it awkward?

Perhaps they scouted out the area and noticed men coming and going. The house of a harlot would be the perfect place to hide.

Or- did God direct them to the house of Rahab??

Someone must have seen them- our story continues:

Rahab and the Spies

Surprisingly, she did not turn them in; Rahab hides the spies.

“But the woman had taken the two men and hidden them. She said, ‘Yes, the men came to me, but I did not know where they had come from. At dusk, when it was time to close the city gate, the men left. I don’t know which way they went. Go after them quickly. You may catch up with them.’ (But she had taken them up to the roof and hidden them under the stalks of flax she had laid out on the roof.)

So, the men set out in pursuit of the spies… and as soon as the pursuers had gone out, the gate was shut.” vv4-7.

Rahab put her own life in danger when she lied to the authorities. They could have charged her with treason and had her killed.

Rahab’s lie was not justified, but considering she was a pagan prostitute living in a depraved community, it is not a surprise she resorted to this tactic.

It shows great courage, however, that Rahab protected the spies. But why did she do it?

The Faith of Rahab

“Before the spies lay down for the night, she went up on the roof and said to them, ‘I know that the Lord has given this land to you and that a great fear of you as fallen on us, so that all who live in this country are melting in fear because of you.

We have heard how the Lord dried up the water of the Red Sea for you when you came out of Egypt, and what you did to Sihon and Og, the two kings of the Amorites east of the Jordan, whom you completely destroyed.

When we heard of it, our hearts melted and everyone’s courage failed because of you, for the Lord your God is God in heaven above and on the earth below.’” vv8-11.

I don’t know about you, but Rahab’s confession of faith completely surprised me!

The word about Israel’s mighty God was spreading, just as He planned. Considering Jericho was on a trade route, news would have naturally traveled about Him among many nations.

They heard about God parting the Red Sea, the overwhelming defeat of the kings Shihon and Og, (Numbers 21:21-35) and that Jericho may be the next conquest.

Rahab heard all this news and believed in the power of the Israelite’s God, forsaking her pagan gods and her faith in their fortified city.

Her faith in God was in its infant stages, but was quite admirable for someone raised in a pagan culture. She heard the stories and believed in God and trusted Him to save her life.

Rahab wanted to leave her sinful life and culture, and wishes the same for her entire family. She asks the spies for their help in protecting them.

“Now then, please swear to me by the Lord that you will show kindness to my family, because I have shown kindness to you.

Give me a sure sign that you will spare the lives of my father and mother, my brothers, and sisters, and all who belong to them, and that you will save us from death.” Vv12-13.

Rahab needed reassurance that she and her family would not die. She asks for a pledge from the spies to “show kindness”, which in Hebrew meant “lovingkindness, merciful, and favor.”

Rahab had shown the spies God’s lovingkindness (which He shows us and wants us to show others) and asks for the same in return.

“’Our lives for your lives!’ the men assured her. If you don’t tell what we are doing, we will treat you kindly and faithfully when the Lord gives us the land.’” V14.

The spies were confident in the Lord’s upcoming victory over the city of Jericho.

“So she let them down by a rope through the window, for the house she lived in was part of the city wall.

Now she had said to them, ‘Go to the hills so the pursuers will not find you. Hide yourselves there three days until they return, and then go on your way.’” vv15-16. 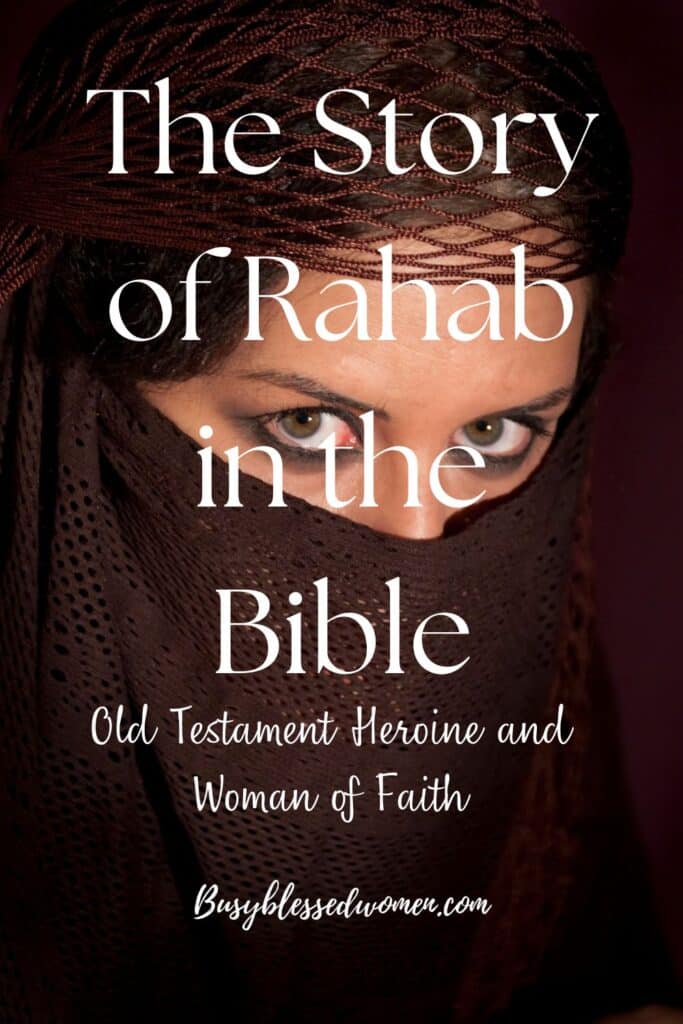 Rahab and the Scarlet Cord

“The men said to her, ‘This oath you made us swear will not be binding on us unless, when we enter the land, you have tied this scarlet cord in the window through which you let us down, and unless you have brought your father and mother, your brothers and all your family into your house.’” V17-18.

“If anyone goes outside your house into the street, his blood will be on his own head; we will not be responsible. As for anyone who is in the house with you, his blood will be on our head if a hand is laid on him. But if you tell what we are doing, we will be released for the oath you made us swear.” v19-20.

“Agreed, she replied. Let it be as you say. So she sent them away, and they departed. And she tied the scarlet cord in the window.” V21.

Rahab lived out her faith through action. She tied the scarlet cord as the spies asked. Without it, she would perish in the attack on Jericho.

We read in Joshua 6:17 that Joshua gives the troops the directive to spare “Rahab the prostitute” and all who are with her.

In verse 22-23, Joshua tells the 2 spies to go in and save Rahab and her whole family. They brought them out and to the Israelite camp, where “she lives among the Israelites.” v25.

Rahab in the Genealogy of Jesus

Not only did she live among the Israelites, but married into the royal family of Judah, which puts her in the genealogy of Jesus.

Who Did Rahab Marry?

Rahab and Salmon had a son, Boaz, which is also recorded.

What Does the Story of Rahab Teach?

The first thing that comes to mind is “do not judge lest you be judged.” Matthew 7:1.

It might surprise us that Rahab was a prostitute, a pagan, or a liar. But her faith saved her, regardless of anything she had done in life.

Her desire to change her sinful ways was in her heart. She is proof that anyone, no matter what they have done in their lives, can seek God’s divine mercy and pardon from their sins.

Rahab’s story is a wonderful example of who Jesus came to save- you, me, and Rahab. We all need Him as our Savior.

Jesus summarizes His life’s purpose as “to seek and to save the lost.” Luke 19:10. Jesus mingled with “tax collectors and sinners” because “it is the sick who need a physician.” (Mark 2:17)

Jesus never condones sin but wants to bring everyone to repentance and a personal relationship with Him.

He had harsh words for the unrepentant chief priests and elders who criticized Him: “I tell you the truth, the tax collectors and prostitutes are entering the kingdom of God ahead of you.” Matthew 21:31.

God saved Rahab from her past, then uses her to bring Jericho down and save her family.

He is the chain-breaker who saves us from our sin, removes our shame, and calls us His child.

•Rahab showed great bravery and courage to help the 2 spies evade capture and defy the king. She risked her life to put her faith in God despite her fear.

•Rahab boldly asked the 2 spies for their help in protecting her from the upcoming battle in Jericho. She spoke from her heart to plead for her life.

•Rahab showed great compassion for her entire family by including them in her plan of salvation.

•She trusted in an unfamiliar God over the pagan gods she grew up with. Rahab believed in God’s power and might over the fortified city walls that had protected her for her entire life.

We’ve already learned of Rahab’s story in Joshua and her genealogy in Matthew 1. But there are 2 more New Testament verses about Rahab.

The writer of Hebrews gives Rahab a place as one of only two women in the “Hall of Faith” recorded in Chapter 11.

“By faith the prostitute Rahab, because she welcomed the spies, was not killed with those who were disobedient.” V31.

Rahab takes her rightful spot in a lineup that includes Moses, Abraham, Noah, Jacob, and others!

James also mentions Rahab among the righteous ones who lived out their faith.

“In the same way, was not even Rahab the prostitute considered righteous for what she did when she gave lodging to the spies and sent them off in a different direction? As the body without the spirit is dead, so faith without deeds is dead.” V25-26.

Rahab is an inspiring story for everyone. Rahab’s faith wipes away her sins. God no longer saw Rahab’s past, but as cleansed and worthy to be in the line of His Son.

Never let your past condemn you or define you. That is Satan at work; trying to hold you down with shame.

If your past is haunting you, give it back to Jesus. He has already done the work on the cross to redeem your life.

Remember courageous and faithful Rahab. Jesus came to save all those who love Him and wish to live with Him eternally.