I became intrigued with the story of Nathaniel the apostle while watching the TV series “The Chosen.” They portray Nathaniel as crying out to God, but receiving no response. Have you ever felt unseen by God? Have you felt He has been silent as you called out to Him? We find Nathaniel’s unusual and unique story in only a few verses, but there is so much to learn from his life and encounter with Jesus.

Was Nathaniel One of the 12 Disciples?

We see his name frequently spelled 2 different ways. Nathanael is a Hebrew name meaning “God has given” or “gift of God.”

Nathaniel is simply the most common, modern spelling of this name, with the same spiritual meaning.

But just to add to the confusion…

We only see him called Nathanael in John’s Gospel. Matthew, Mark, and Luke refer to him as “Bartholomew.”

The name Bartholomew comes from being named after his father– “bar-tolomei”, meaning “the son of Tolomei” in Aramaic. Bartholomew is his surname (last name).

Bible scholars widely accept, however, that Nathanael and Bartholomew were the same person.

The Story of Nathaniel in the Bible

We hear very little about Nathaniel except for his name on lists of the disciples in all 4 Gospels and in Acts.

But John gives us an encounter Nathaniel has with Jesus, which seems very unusual. We find this story in John 1:44-51.

As Jesus was calling His disciples early in His ministry, He left for Galilee and it was there that He found Philip. Jesus calls Philip to follow Him, which he did.

“Philip, like Andrew and Peter, was from the town of Bethsaida. Philip found Nathanael and told him, ‘We have found the one Moses wrote about in the Law, and about whom the prophets also wrote- Jesus of Nazareth, the son of Joseph.’” vv44-45.

The good news of the Messiah’s arrival was not something Philip could keep to himself. He immediately goes to Nathaniel to witness about whom he has seen.

It’s interesting that Philip goes back to Old Testament prophecies when describing Jesus.

Both men were well versed in the Scriptures and knew the prophecies of the Messiah to come, from Moses and the prophets. Nathanael would have easily recognized Philip’s reasoning.

But instead of running with excitement to meet Jesus, the long-awaited Messiah, Nathaniel responds with a skeptical remark:

“Nazareth! Can anything good come from there? Nathaniel asked.” v46.

Why Was Nazareth Despised?

Interestingly, we don’t find Nazareth mentioned at all in the Old Testament- not one mention in all the genealogies and Bible stories.

Nazareth was an obscure, tiny, far-flung village. It may also been despised because the Romans stationed an army unit there.

To accept the Messiah coming from such a lowly place as Nazareth seemed unlikely for their future King.

[But check this out!-

Interestingly, the name “Nazareth,” comes from the Hebrew word “the branch,”–Neser.¹

When Isaiah hints at the coming Messiah, he says- “The Branch of the Lord will be beautiful and glorious.” (4:2)

Jeremiah 33:15 alludes to Jesus as the Branch, saying, “I will cause to grow up to David a Branch of righteousness.”

Maybe Nazareth wasn’t as far-fetched as they thought??]

Anyway, back to our story…

Come and See in the Bible

Philip did not argue with Nathanael’s comment or question his doubts. He simply answers, “Come and see.” v46. This simple invitation to Nathanael was to meet Jesus and decide for himself.

This is not the first time we hear this invitation.

•Jesus notices 2 disciples (most likely Andrew and John) following Him along a road. Jesus asks them what they want. They ask Him where He is staying, and Jesus replies, “Come and you will see.” John 1:39.

•The woman at the well drops everything to run back to town after encountering Jesus, saying, “Come, see a man who told me everything I ever did!” John 4:29.

•Psalm 66:5- “Come and see what God has done, how awesome his works on man’s behalf!” (In remembrance of God’s parting of the Red Sea to save the Israelites.)

Jesus extends this same invitation to all, but doubts can keep some away from Him. Or perhaps they know very little of Jesus or don’t know Christians in their personal lives.

“Come and see” is a wonderful way to invite others to meet Jesus and make their own decision. Nathanael put aside his prejudice and did just that. 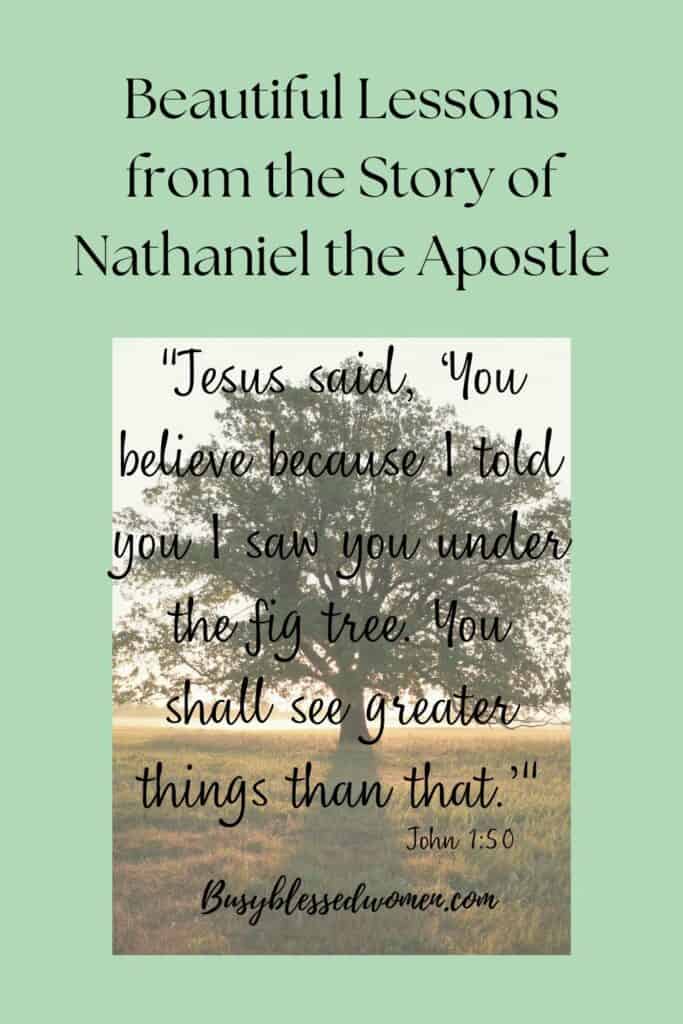 “When Jesus saw Nathanael approaching, He said to him, ‘Here is a true Israelite, in whom there is no deceit.’” v47.

What an amazing and humbling compliment from Jesus!

Nathanael had never met Jesus in person, but Jesus knew everything about him. He knew Nathanael’s sincere and open spirit to the truth, knowledge of Scripture, what he believed, his character, and the condition of his heart.

Nathanael was everything Jesus was looking for in an Israelite. He believed in the promises of God.

Nathanael accepted Jesus’ assessment of his character but wondered how He could have possibly known about him.

“How do you know me?”, asks Nathanael.

Jesus explains: “I saw you while you were still under the fig tree before Philip called you.” v48.

“Then Nathanael declared, ‘Rabbi, you are the Son of God; you are the King of Israel.’” v49.

The Holy Spirit opened Nathanael’s eyes, and he immediately realizes that only God could have seen him there and known his very thoughts.²

Nathanael realizes Jesus knew his heart and everything about him. He accepts Jesus as Messiah at that very moment. Philip had been right!

Nathanael proclaims Jesus’ unique relationship between Father and Son and His power as Messiah and King. This was the boldest faith claim made about Jesus up to this point.

Nathanael under the Fig Tree

What was Nathanael doing under the fig tree?

The common phrase “under the fig tree” described a time of studying the Torah. It also was a Jewish custom to sit under an actual leafy fig tree to sit and pray and study Scripture.

Whether Jesus actually saw him under a fig tree, or Nathanael was simply spending time meditating on God’s Word, Jesus knew Nathanael would be an excellent disciple.

Jesus responds to Nathanael’s statement of faith with a promise:

“Jesus said, ‘You believe because I told you I saw you under the fig tree. You shall see greater things than that.’ He then added, ‘I tell you the truth, you shall see heaven open, and the angels of God ascending and descending on the Son of Man.’” John 1:50-51.

While this may sound like a random or confusing statement to us, Nathanael would have understood this promise’s reference to the Bible patriarch Jacob, the father of the 12 tribes of Israel.

He also would have recognized Jesus’ initial greeting, “Here is a true Israelite, in whom there is no deceit” as a reference to Jacob.

Jacob practiced deceit by claiming his brother’s birthright and blessing (among other things). Jacob changed his ways later in life and God changed his name to “Israel.”

Jesus is comparing Nathanael (an honest and true “Israel”) with Jacob (a deceitful one.)

Jesus continues His references to Jacob when He speaks of a dream given to Jacob of a stairway/ladder from heaven to earth with the Lord standing above. (Genesis 28:10-15).

But Jesus promises Nathanael an even greater sign than Jacob saw- to see heaven open and to connect Jesus, the Son of Man, as the ladder, the link between heaven and earth that we need.

This is the end of Nathanael’s story in the Bible. We hear no other details of his life. The truths we learn, however, are still profound.

•Isn’t it interesting that Jesus didn’t confront Nathanael about his skepticism? Our God is so kind and gracious when we come to Him with questions and doubts!

•How comforting to know that God knows an honestly seeking heart and every single thing going on in our lives. We are never “unseen” by our loving God. ♥

He knows our every fear, struggle, and trial. He knows all our thoughts, hopes and dreams.

•Nathanael’s encounter with Jesus was so powerful and personal that all his doubts immediately melted away.

In the same way, each one of us needs a personal encounter with Jesus to accept Him and bring genuine change to our lives.

Inviting Others to Come and See

•Like Philip, we have the privilege of revealing Jesus to others. We can simply say, “come and see” to those who are skeptical or indifferent to Jesus.

We can encourage them that Jesus loves them and will meet them wherever they are in their lives.

While we do not possess the power to change people’s minds and hearts, we can introduce them to the One who can- Jesus.

We can pray for them, asking God to give them a willingness to listen and learn, and for the Holy Spirit to open their eyes to a life-changing encounter with Jesus, just as Nathanael had.

•Jesus calls us to “follow Him.” What does “following Jesus” mean to you? What is required of you?

•Have you ever felt God does not see you or care about your circumstances? How does the story of Nathanael give you comfort?

•What can you learn from Philip’s and Jesus’ response to Nathanael’s skepticism?

•How does your life show others what Jesus is like?

•What are ways you can invite people to “come and see” today?

All Scripture is taken from the NIV version unless specified otherwise.

2 thoughts on “Nathaniel the Apostle”