If you looked up a list of obscure Bible characters, you would find the Old Testament prophetess Huldah. I had never even heard of Huldah’s story until someone asked me to write about her. Even though her story is short, she plays an oversize role in Israel’s history. She was one of only nine true prophetesses named in the Bible. Miriam and Deborah might be more familiar to you, but Huldah’s impact left a lasting legacy for the Israelites. She is also an enormous encouragement to women who have roles within the church. 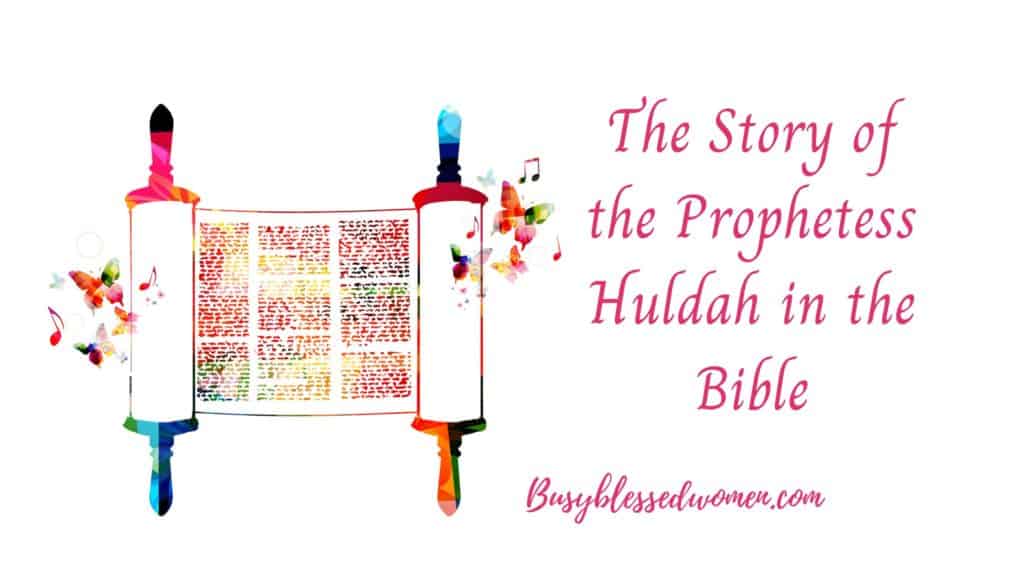 Who was Huldah in the Bible?

Her name’s meaning is not totally clear. The verb form of her name means “the world” and the noun describes a “weasel” (from its gliding motion.) Apparently it was a common practice among Jewish families to give children names which signified animals or their positive attributes.

Huldah lived during the reign of King Josiah (3285-3316) along with the prophet Jeremiah, who also was her relative.

The question of why Huldah was called upon and not Jeremiah cannot be answered. Both Jeremiah and Zephaniah were in Judah at the same time as Huldah. But God chose Huldah to speak for Him.

She was a descendant of the tribe of Ephraim (Joseph’s second son), Rahab, and Joshua. Huldah lived in Jerusalem with her husband, Shallum, who was “keeper of the wardrobe”- someone who took care of the royal robes (an esteemed position.)

In a society where men dominated most roles and we find many examples of the negative attitudes towards women, does it seem odd to you that there were female prophets in the Bible? And why were they needed?

Israel centered their worship around priests and their duties as set out by God in Numbers 18. God specifically ordained Aaron and his sons from the tribe of Levites to be responsible for the priestly duties. They handled not only all the physical work of the sacrifices, but were to be spiritual and moral guides, and teach God’s law.

But even the priests turned away from the true worship of God and led their people into idol worship. The Israelites eventually lost their identity as a holy people of God.

Enter the need for prophets and prophetesses. God gave them the immense responsibility of speaking on behalf of Himself.

What is a Prophetess?

Simply put, a prophetess is a female prophet. They had the same role as their male counterparts- speaking God’s word and truth, given to them by God’s authority, to the people. Both were called and appointed by God to be His spokesperson. We find nothing in Scripture that shows people treated them any differently than their male counterparts.

The Role of a Prophetess

Their role was to guide the wayward people back to God by preaching His word. They were also called “seers” for their ability to foresee things or events.

Prophets and prophetesses, many times, had other professions. Jeremiah and Ezekiel were priests, Moses was a shepherd, Deborah was a judge, and it is thought that Huldah was probably a teacher since she lived in a scholarly section of Jerusalem.¹ 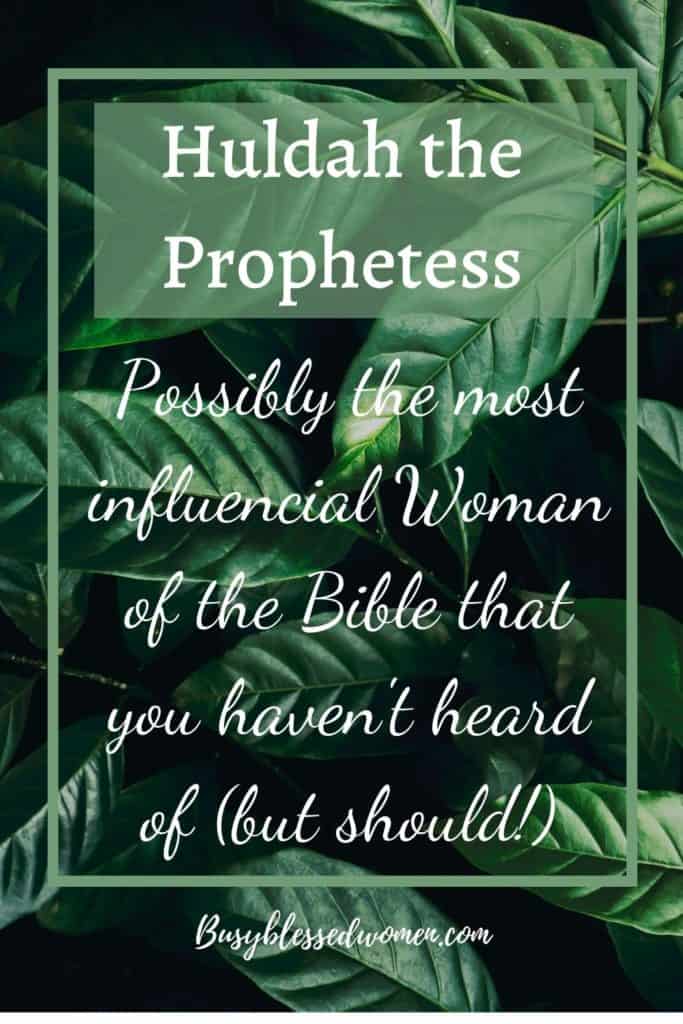 Huldah was a temple prophetess, working during the reign of King Josiah. This is her story from 2 Chronicles 34:22-38-

King Josiah in the Bible

King Josiah was one of only 5 good Kings in Israel’s entire history (compared to the 33 evil kings). Like each righteous king, he is described as doing “right in the eyes of the Lord.” He worked hard to purge Judah and Jerusalem from a variety of idols, altars, and images that had even seeped into the temple, violating its holiness.

King Josiah began repairs to purify the temple. In doing so, the high priest Hilkiah unearthed the “Book of the Law of the Lord.”

The Book of the Law of the Lord

It was lost during the reign of the evil kings. Hilkiah turned it over to the king’s secretary/scribe, Shaphan, who took it to King Josiah and began to read it aloud.

It appalled King Josiah when he heard the words of the law. His people had neglected God’s law so thoroughly that he tore his robes in grief. The warnings of discipline and judgement to come because of their neglect were alarming. He was so convicted of the people’s sin, he asked Hilkiah and 4 other men to “go and inquire of the Lord for me.”

What would happen to the Israelites? Could God forgive them? King Josiah knew the people deserved judgement and needed to hear the word of God so they would genuinely repent.

The men immediately went to Huldah for spiritual guidance regarding the state of their entire nation. They had every confidence she would reveal the mind of God to them.

It’s interesting to me that King Josiah went above his High Priest looking for insight into God’s word. The role of the High Priest was to be their supreme religious leader. It gives new insight into the astonishing role of Huldah to help them understand the wisdom and heart of God.

She responds with these words:

“This is what the Lord says: I am going to bring disaster on this place and its people- all the curses written in the book that has been read in the presence of the king of Judah.” 2 Chronicles 34:24.

Yes, God would pour out His righteous anger onto them. But she also had words of mercy for King Josiah:

“Because your heart was responsive, and you humbled yourself before God… I have heard you… Your eyes will not see all the disaster I am going to bring.” vv27-28.

When the men took Huldah’s prophecy back to the King, Josiah read the words of the book to the people. He renewed the covenant with the Lord and all the people pledged themselves to it. As long as he lived, the people followed God.

What Can We Learn from Huldah

•She was a respected and highly regarded woman of God. The five men went straight to her when told to inquire of the Lord. King Josiah does not even question her message to him. They had confidence in her and knew they could trust her to relay the word of God truthfully.

•She boldly and courageously spoke God’s truth, even though it wasn’t good news. They could have retaliated against her. Prophets many times experienced persecution through rejection of their message, ridicule, and sometimes, physical violence.

•God can use anyone who has a heart dedicated to Him and wants to serve Him. We do not need degrees, money, prestige, or a well-known name to be used by Him. We only hear of little-known Huldah mentioned once in all of Scripture.

•We may have only heard of her this one time, but Huldah had an important role in the great spiritual revival of the people of Judah. The Israelite’s love and devotion to God came after Huldah spoke the prophecy God gave had given her.

•She was a faithful and obedient servant of God- she did what God asked her to do.

•Huldah was confident in her God. She must have had a strong relationship with Him, known the Scriptures and trusted Him to work through her.

God has called all Christians to be His spokesperson. What is your role?

How often do you listen to God’s voice in your own life?

How does Huldah’s story encourage you in your own ministry?

Do people recognize you as a person to seek out when they need God’s wisdom and guidance?

All Scripture is from the NIV unless specified otherwise. 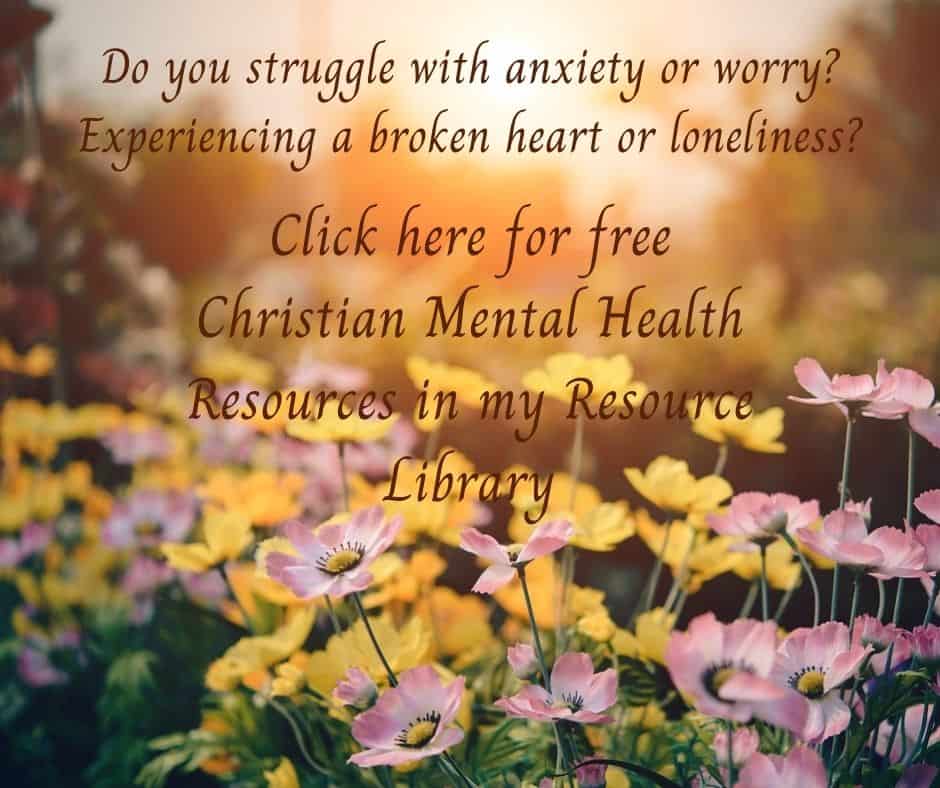 6 thoughts on “Huldah in the Bible”