Last week’s blog referenced Luke 17:4 when Jesus was teaching his disciples about forgiveness. They asked him to increase their faith in order for them to do what He asked.  I felt a little stab in the heart when I read that verse. I’ve struggled a bit with forgiveness in my past. I’ve wrestled about how I should feel if I truly forgive. Shouldn’t I be able to let the transgression go if I have forgiven? But it was comforting to know that Jesus’ own disciples struggled with the power of forgiveness as well! 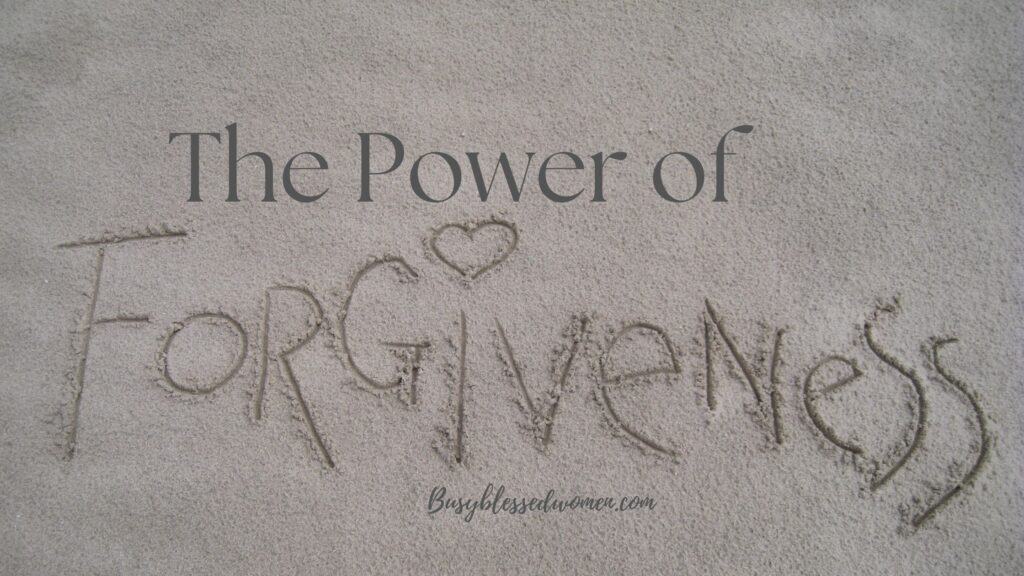 I think I need to take a journey to see what Jesus has to say about forgiveness (it’s a lot). If anyone has any words of wisdom for me about how you overcame a struggle with forgiveness, I’d love to hear from you!

When Jesus teaches us about prayer in the 6th chapter of Matthew, he starts with what we call the “Our Father”. Verse 12 gives us specific instructions: “Forgive us our sins, as we have forgiven those who sin against us.”

Don’t mistake that last part by thinking that we earn forgiveness by forgiving others.

God freely sacrificed his own Son so that we could be forgiven. We’ve done nothing to earn it or deserve it.

When we forgive others, we are acknowledging that we understand and fully receive God’s forgiveness for our own personal sins.  To refuse to forgive others is to refuse and deny how much it cost God to forgive us in the first place.

The Parable of the Unforgiving Servant

In a nutshell, a king was settling debts with his servants. The servant owed way more than he could pay, and the king decided to sell his servant and his family to repay the debt. The servant falls to his knees and begs the king to give him more time to repay his debt.

The king has pity on him, cancels his debt, and lets him go. As the servant is leaving, he sees a fellow servant who owed him money. He grabs him, chokes him and demands immediate payment. When the fellow servant asks for more time to repay him, he refuses and has him thrown in jail!

If that servant had been truly sorry for the debt he owed and truly humble in receiving the king’s forgiveness of his debt, he could never turn around and treat a fellow servant in the way that he did.

In turn, when we realize how great our debt to God is, and how much it cost Jesus to atone for our sin, it would be impossible for us to turn around and say to others that we are too hurt or too angry to forgive them for the sin they commit against us.

It’s God’s unfathomable love for us that made a way for us to be forgiven.  Psalm 103: 11-12 expresses it beautifully.  David says “For his unfailing love toward those who worship him is as great as the height of the heavens above the earth. He has removed our sins as far from us as the east is from the west.”

What a beautiful symbol of God’s love and forgiveness!  The distance between east and west is incalculable. And just as mind-boggling, God made a way to completely remove our sin from us. Not only are they gone; it’s as if they had never been committed. He forgives, and then he forgets.

If we are following God, who wipes our record clean, we need to model our attitude of forgiveness after his. We are to forgive each other and also forget the sin.

Why Is It So Hard To Forgive?

OK, so here’s where I stumble! In my defense, (in which there isn’t one, really) I find this happens when there is no repentance on the part of the person who has sinned against me.

When God forgives me, he removes the sin and forgets about it completely.

It’s much easier to forgive when someone asks for it, but it feels a bit sticky when they don’t.

Jesus tells us though, “Love your enemies, do good to those who hate you, bless those who curse you, pray for those who mistreat you”–Luke 6: 27-28 NIV.

If we don’t do those things, it only harbors bitterness, hatred, resentment, and anger. It keeps a wall up against what God wants us to experience in life- his promised peace and joy.

I am going to add some special caveats to forgiving when the sin involves the deep hurt of abuse of any kind. Forgiveness in these situations is not easy.

In fact, I would say that forgiveness in these situations may be even more dependent on the work of the Holy Spirit in our lives, and our faith and trust in God.

In these situations, forgiveness is a process, similar to grief. We know that any forgiveness brings healing to the person doing the forgiving. But forgiveness doesn’t mean we have to trust that person.

John Piper says, “You can actually look someone in the face and say: I forgive you, but I don’t trust you.” This is not rude or unforgiving. It is wise.”¹ (He was speaking of an example of a woman whose husband abused her children.)

When we start deciding that the sins we commit make us a better person than someone else’s sin, we are dipping our toes into some dangerous waters. All sin separates us from God.

Forgiveness is not about feeling good about what was bad (the sin).

It’s also not about holding on to the anger that might accompany the sin. There is freedom in handing the situation over to God, the just judge.

Forgiveness means we can trust God to be our defender in the situation.

Sometimes we have to leave the questions, confusion and broken relationships in God’s loving and capable hands. We know God can bring good out of every situation.

Trusting him to do so can lead us into a deeper relationship with him and onto paths that we might not have thought to take.

In conclusion, I want to circle back to the statement we started with from the “Our Father” prayer. Jesus tells us to ask for forgiveness for our sins. It struck me that we daily sin against God- by giving him less of our time, our worship, our prayers, our witness to others, etc.

I’m convicted that I should also try to daily confess my sins to him. If my sin comes between me and God, I want to restore that brokenness.

He died on the cross for just that purpose.

Just as I finished writing today, I read the following and felt I should include this aspect of forgiveness as well. If God brings these words to me, I feel I should bring it to you. Maybe someone is struggling with being forgiven and needs to hear these words:

“Christ died for sins once for all, the righteous for the unrighteous, to bring you to God.”  1 Peter 3:18
You’re forgiven and that’s a promise Jesus will NEVER break.

“Be kind and compassionate to one another, forgiving each other, just as in Christ God forgave you.” Ephesians 4:32

All Scripture if from the NIV unless specified otherwise.

2. C.S. Lewis, On Forgiveness in The Weight of Glory

4 thoughts on “The Power of Forgiveness”